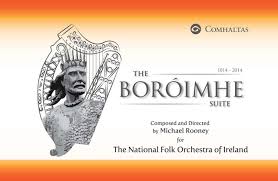 The Boróimhe Suite, commissioned by CCÉ to mark 2014,  the Millennium of the death of Brian Ború, composed and directed by Michael Rooney and performed by the National Folk Orchestra of Ireland, will take place in Killaloe on Wed 23rd April 2014 in St. Flannan’s Church.

This promises to be a fantastic experience and the show will open with a performance of Kincora Call, a tribute and call to arms for Brian Ború, performed by students of St. Anne’s Community College, Killaloe, who have performed to a national audience including the Launch of the National Brian Ború Millennium Commemorations at Trinity College Dublin.

Tickets for this once in a millennium event are 20 euro and are available from www.coisnahabhna.ie

Prizewinners at Ceol an Gheimhridh 2019